Lost In The Forest 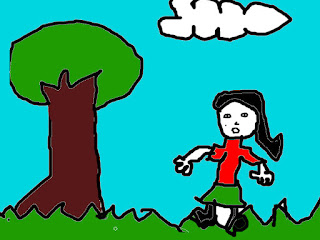 A little girl named Zoe was taking her little puppy dog for a walk. When Zoe was just about to turn back. Her dog came loose from her little pink leash and ran into the old, dark and creepy forest. So Zoe went after her little dog, however, it was not long before the girl figured she was lost.


Zoe called out and a little man the size goblin appeared with
the puppy. Zoe asked for her puppy back but the man said no.  I will give you your dog back if you can guess my name. Then the man vanished in a mist of wind with the puppy.


After one night the man appeared again and she guessed every name she could think of but still she didn’t guess his name. After the next day Zoe tried to guess his man’s name then she saw the man dancing around a campfire and sang a little song about his name and then he said his name.  The next night the man came back, Zoe guessed some other names so the man didn’t get man stomped his feet on the ground and let go of the puppy and disappeared into the forest. Then Zoe saw a little map that led out of the forest. Then got her dog on her leash and went back home.