Day 1: Kia Ora These holidays our amazing teachers in team 5 have created a series of Holiday blogging activities for us to complete. Everyday I will be posting an activity, explaining what we had to do and so on. 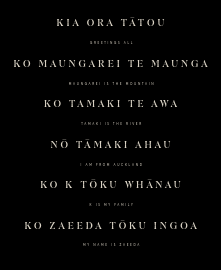 Activity 1: Exploring Your Roots
For this task we had to create our own pepeha. We got a template and a site to use for this activity. I enjoyed this task and it was definitely easy, in future I hope we get to do more challenging tasks.

Here is my pepeha, I differen't really know what else to add to it. Because it's a really basic thing, and I'm proud to know mine. This task was exceptionally easy because, the teachers at school encourage us to learn things like our mihi and pepeha.

This activity was inspired by a famous New Zealand Director. His name is Taika Waititi. Not only is he an actor but he is also a Filmmaker, Director, Actor and Comedian. He has create/directed many popular films like, "Hunt for the Wilderpeople and "Jojo Rabbit". As a child Taika Waititi lived in Raukokore. When he graduated from high school Taika Waititi moved to Wellington and studied drama at Victoria University.

Even though he moved away he didn't forget his roots. No matter what he didn't forget where he came from and who his family is. Taika Waititi come from a family for of different Diversities culturally. His dad is Māori (Te Whānau-a-Apanui) and his mother is Russian-Jewish.
Today was fun, I'm looking forward to doing more the activities for the days ahead, but I do hope the these tasks get more challenging.
Posted by Zaeeda at 16:02 No comments:

WOW, I can't believe term 2 is already coming to an end. We've all been through some much with lockdown and being busy getting things back to normal. This will definitely be a term I will never forget but even so, I would like to reflect on some of the best things about this term.

Lock-Down. It was a bittersweet feeling going in and out of lock down. It gave me time to reflect on myself, and think about how I've started the year. But it meant that we somehow had to keep up with our learning and other activities like Prefects and Penn. We did keep Penn going and we also had assembly going, somehow social distancing brought everyone closer together emotionally. I did enjoy my time at home during lock-down. But it was even better to get back to school and back to our normal routine.

When we got back to school we had a lot of things happening. We did the 40 hour famine which was cool I raised $365 and we will find out how much we raised altogether next term. We changed home classes. These changes were really important and I can't wait for the rest of the year.

Selwyn College, I know I'm at Pt England right now, but pretty soon that's where I'll be going. Just last week we were all getting ready with open evenings and interviews. Every school seems just as amazing as the next, and I'm looking forward to what the future, bring ahead. But I know that I should make the most of my time here at PES.

Overall Term 2 was hectic and really tested my ability to learn. But with a positive mind-set and a bit of determination. WE DID IT.
Posted by Zaeeda at 09:55 No comments:

This term we had to create an animation to explain one of the earth's system. We had the choice to choose between animating a Volcano Erupting or the Water-Cycle. I chose to animate the Water-Cycle I started with precipitation then Accumulation, Condensation, Evaporation, Transpiration and Sublimation.

Next time I feel that if I start to work on my animation earlier the graphics would come out looking better, I also had to re-record my voiceover due to background noise. But overall I am proud of this animation. :)
Posted by Zaeeda at 10:24 No comments:


Today we finished the million pound bank-note text. It was very interesting and I could slightly see where the story was going but it was a slight surprise that the gentleman that was betting turned out to be Portia father. I really liked this text and I am quite happy with doing texts like this.
Posted by Zaeeda at 09:39 No comments:

What is the Water-Cycle?

The water-cycle is a key component in the hydrosphere. The water cycle is a hydrological cycle that has been circulating throughout the world for hundreds of years.

After precipitation, accumulation takes place. Accumulation is the process of water gathering in a body of water. This can be as large as the ocean or as a small puddle. Without accumulation, we wouldn’t have any oceans, rivers or lakes.

Evaporation is the third part of this process. This is when water changes from a liquid to a gas or vapor. Once water has accumulated, heat from the sun evaporates the water into vapor. Water vapor can be seen on your window as a result of the rain. Evaporation is the main movement of water through our hydrosphere as it returns from liquid form to atmospheric water vapor.

Condensation is when water vapor collects to form clouds. Condensation is the movement of water vapor changing into liquid water, basically the opposite of evaporation. The clouds will then continue to get heavier and heavier until it bursts, releasing as precipitation. Condensation is essential in the water cycle as it is responsible for the formation of clouds.

This is the key element of the water cycle, but there is also transpiration, the process of water going into plants. This process involves water from the rain being absorbed by plants through their roots, stems and leaves. When water is exhaled by plants, it leaves in water vapor adding building up the condensation in the clouds and returns as precipitation.

Another part of the cycle is Sublimation. It’s when the clouds not only produce water but also release what we know as Hale, Ice or Snow.

That is the complete order of the water cycle. Precipitation, Accumulation, Water-vapor, Evaporation, Condensation, Transpiration, Sublimation.
Posted by Zaeeda at 15:47 No comments:

Email ThisBlogThis!Share to TwitterShare to FacebookShare to Pinterest
Labels: # proud, ~Term 2~, 2020, Room 4, Team 5, What is the Water-Cycle?, Year 8, Zaeeda


Today we looked at fractions. We had to answer the workout and answer the questions on the slides. I actually struggled a little bit near the end but, I just need to practice it some more. Looking forward to doing more!
Posted by Zaeeda at 10:11 No comments:


This week we looked at fractions once again. Near the ending we looked at turning fractions into decimals. It was pretty easy and a good recap of most of the things last year. I am however ready to learn more about fractions and decimals.
Posted by Zaeeda at 12:19 No comments: